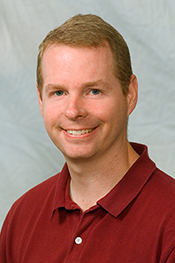 He is a member of the Association for Computing Machinery, the IEEE Computer Society, the Electronic Frontier Foundation, the American Society for Engineering Education, and has been an XSEDE Campus Champion since 2011.

At a high level, Andresen’s research is in distributed systems, ranging from sensor networks monitoring bovine health levels to high performance computing systems. His research often intersects with his role as director of the Institute for Computational Research in Engineering and Science, which works to build the cyberinfrastructure foundation to allow K-State to successfully compete at the national level as well as oversees the campus research HPC cluster, Beocat. His regular research partnerships extend beyond computer science to civil engineering, biology, agriculture, biochemistry, physics and geography, as well as beyond K-State to Nebraska, Oklahoma, Missouri and Arkansas. He is consistently quoted in news articles in the Kansas City Star and other outlets, and has had articles about his research appear in outlets like The Economist and ScienceDaily.

Andresen is an NSF CAREER award winner with more than $40M total funding from NSF, NIH, USDA and private industry, including 21 grants as the PI and two NSF MRI grants. He has more than 85 refereed publications, an h-index of 17, an i10-index of 23 and more than 1,100 citations according to Google Scholar. According to ResearchGate, his research has been viewed more than 6,000 times and downloaded more than 1,400 times. He has served on numerous program committees and review panels (including NSF and NIH).

On a national level, he is active in the HPC and XSEDE communities. His work has been featured in HPCWire’s podcast, Soundbites (Topic: “The Big Data Challenges of Unmanned Systems Research”), and has served as a member of the XSEDE Campus Champions National Leadership Team, which consists of six leaders selected from 250+ campus champions across the US. He is currently the regional Campus Champion coordinator.

Andresen won the K-State Engineering Student Council Outstanding Leadership Award three times (‘04, ‘05, ‘08), and was nominated twice for the College of Engineering James L. Hollis Memorial Award for Excellence in Undergraduate Teaching (‘99, ‘06). Twenty-four of his graduate and undergraduate students have had their research results published at international venues. He has served on more than 300 graduate student committees, including one doctorate student, and 19 doctorate committees, 146 as master’s major professor, and 143 master’s committee memberships. He advises the local ACM chapter, oversees the semester local programming contests (with more than 100 students typically participating), and coached the K-State entry in the student programming contest at Supercomputing ‘10, where the team placed third in the world.