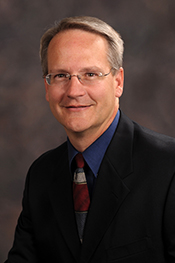 Scott DeLoach received a bachelor’s degree in computer engineering from Iowa State University in 1982, and master’s and doctoral degrees in computer engineering from the Air Force Institute of Technology in 1987 and 1996, respectively. From 1981 to 2001, he served in the United States Air Force. During his 20-year career, he worked at the Aeronautical Systems Division, the 544th Strategic Intelligence Wing, the Air Force Research Laboratory, and at the Air Force Institute of Technology. In July 2001, he joined the department of computing and information sciences at K-State. DeLoach was named interim head of the department in July 2014 and the permanent head of the department of computer science in September 2016.

DeLoach’s research interests focus on applying software engineering methods, techniques and models to the design and development of intelligent, complex, adaptive, and autonomous multiagent and distributed systems. His research in this area currently focuses on runtime/design time models, tools, and techniques for smart grid and intelligent power distribution systems, and the use of runtime models for adaptive network security.

DeLoach has authored more than 20 journal articles and book chapters, 75 refereed conference and workshop papers, and 17 technical reports. As of July 2021 he has been cited more than 5,400 times with an h-index of 36 and an i-10 index of 79 according to Google Scholar. DeLoach has been on the editorial board for the International Journal of Agent-Oriented Software Engineering since 2005 and has served on dozens of conference program committees in a variety of areas from software engineering and multiagent systems to cybersecurity. He has graduated seven doctorate students and more than 30 master’s students. He was the recipient of a National Science Foundation CAREER award in 2004, the K-State College of Engineering’s Frankenhoff Outstanding Research Award in 2011 and the K-State Outstanding Department Head award in 2021.