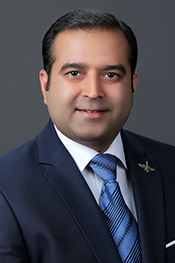 Munir has been the recipient of many academic awards including the doctoral fellowship from the Natural Sciences and Engineering Research Council (NSERC) of Canada. He earned gold medals in electrical engineering and academic roll of honor for securing rank one in pre-engineering provincial examinations out of approximately 300,000 candidates.

He has published more than 70 scholarly peer-reviewed articles related to his research interests, with two of his research papers receiving Best Paper Awards and two more being selected as Best Paper Finalists. He published a book on modeling and optimization of parallel and distributed embedded systems in Wiley-IEEE in 2016. He also holds three U.S. patents.

He has served as a program committee member and a reviewer for various IEEE and ACM conferences; a reviewer for various IEEE, ACM and Elsevier journals; and a reviewer for National Science Foundation panels. He has served on the technical program committee of several conferences including ACM GLSVLSI, IEEE ICCD, IEEE iNIS, IARIA ICNS, IEEE CloudNet, IEEE MCSoC and IEEE/IFIP EUC. He served as a session chair at the IEEE International Conference on Consumer Electronics (ICCE) in 2020, and a special sessions chair at the IEEE International Symposium on Smart Electronic Systems in 2021. He currently serves as an associate editor for IEEE Consumer Electronics Magazine. He is a senior member of IEEE.

His research has been sponsored by the National Science Foundation (NSF), Air Force Office of Scientific Research (AFOSR), Air Force Research Laboratory (AFRL), National Aeronautics and Space Administration (NASA), and Semiconductor Research Corporation (SRC). He has been recognized with an NSF Computer and Information Science and Engineering Research Initiation Initiative award. He has also been awarded Summer Faculty Fellowships at AFRL, Information Directorate (RI) in 2019, 2020 and 2021.