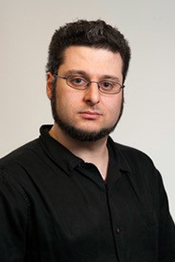 Director of the Center for Information and Systems Assurance

Eugene Vasserman received a bachelor’s degree in biochemistry and neuroscience with a computer science minor from the University of Minnesota in 2003. He received a master’s degree in computer science in 2008 and a doctorate in 2010, also from the University of Minnesota. Following graduation, he joined the (then) department of computing and information sciences at Kansas State University as an assistant professor. He was promoted to associate professor in the now-renamed department of computer science in 2016. Since 2015, he has served as the director of the Center for Information and Systems Assurance (CISA).

Vasserman’s research is chiefly in the area of security for medical cyber-physical systems, security usability and user education. His past work spans the gamut from security vulnerabilities emergent from the routing infrastructure of the internet, to energy depletion attacks in low-power systems, to non-invasive control-flow monitoring in embedded systems, to secure hyper-local social networking, to privacy and censorship resistance at a global scale (systems capable of supporting up to a 100 billion users). Vasserman and his co-authors were the first to introduce and formalize membership concealment as a security property, showed that it is a requirement for effective censorship resistance, and proposed the first membership-concealing network design.

Vasserman’s work and research interests are deeply cross-cutting, and he has collaborated extensively with researchers in physics, psychology, theoretical agronomy, medicine, electrical engineering and, of course, computer science.

Vasserman has (co-)authored more than 40 papers appearing in top journals and competitive conferences, has more than 780 citations, an h-index of 12 an i10-index of 15 as reported by Google Scholar. He has received numerous competitive research grants throughout his career, both as primary and co-investigator, including the prestigious National Science Foundation CAREER award in 2013.

Vasserman has a strong record of academic service, having reviewed more than 130 papers, served on numerous program committees for top conferences, and chaired the 2014 USENIX HealthTech Summit. He is a member of the UL 2900 standardization process for cybersecurity of network-connectable devices, the AAMI interoperability working group, and the AAMI / UL 2800 effort to standardize safe medical device interoperability, where he chairs the cybersecurity task group. Closer to home, Vasserman serves on numerous departmental committees and is the faculty adviser for the Cyber Defense Club competition team and the Makerspace Club.